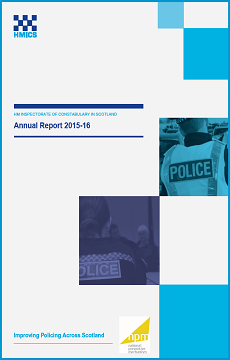 This annual report from Her Majesty’s Chief Inspector of Constabulary in Scotland (HMICS) provides an update on how HMICS has carried out its statutory function for the period of 1 April 2015 to 31 March 2016 and follows from his previous Annual Report which was published on 18 December 2014. It also offers an assessment on the overall state, effectiveness and efficiency of policing in Scotland and on the performance of Police Scotland and the Scottish Police Authority, (SPA) during 2015-16.

Although it has been a year of significant change for both Police Scotland and the SPA, overall performance remains strong for the third year of the single service. Officers and police staff at all levels remain strongly committed, in often challenging circumstances, to providing a good service to communities across Scotland.

HMICS inspections during the past year have covered a range of policing activity including local policing, the use of biometric data, counter corruption and call handling. In our second major crime audit, we noted that the nature of crime is changing and increasingly taking place online. Police Scotland currently assess that 80% of its demand is non-crime related, with much of this relating to vulnerable people and placing additional pressure on officers and police staff across Scotland.

The report acknowledges that the creation of Police Scotland was only the beginning of a major change programme. The last three years of police reform have concentrated more on consolidation and delivering operational stability rather than delivering major change. HMICS welcomes the work being carried out jointly by Police Scotland and the SPA on a new ten-year strategy but, to be successful, it must be supported by a professionally managed implementation programme, as well as a financial strategy that identifies the additional investment necessary to transform policing and achieve the longer-term savings needed to make policing in Scotland sustainable.”

A balanced workforce will be critical to the success of the ten-year strategy and it is essential that the Chief Constable has sufficient flexibility to work with the SPA and deliver the right mix of officer numbers and police staff. This should include a mix of specialists to meet the changing nature of crime and the wider demands on policing.

Major financial challenges persist and although there have been changes in the strategic financial leadership of both Police Scotland and the SPA, urgent work is still needed to strengthen their finance function and improve their scrutiny governance.

Effective scrutiny remains one of a number of critical success factors and the report comments on the Review of Governance in Policing report published by the Chair of the SPA. In terms of effective localism, HMICS observed that engagement with communities remains fundamental to the success of Scottish policing and notes that changes in community planning and community empowerment offer new opportunities to strengthen local policing and streamline local scrutiny.

Mr Penman acknowledged that over the last 12 months, there have been several new executive appointments into Police Scotland. These have established a new team to take forward the second transformative stage of police reform and deliver the new ten-year strategy for policing. Opportunities exist under this new leadership to develop and articulate a clear vision for the policing of Scotland and to build a sustainable, locally responsive and accountable police service.