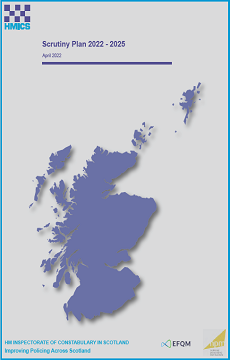 Domestic abuse, online fraud, missing persons, legitimacy and organisational culture are among the aspects of policing in Scotland which will be under review in the coming months and years.

The wide ranging inspections by HM Inspectorate of Constabulary, which also include areas such as probationer training, strategic workforce planning, healthcare in custody and forensic services, are detailed in the body’s Scrutiny Plan which is published today (Tuesday 12th April).

Covering the next three years, it is the result of the most extensive consultation exercise conducted by HMICS with its partners and stakeholders including Police Scotland, its officers and staff; the Scottish Police Authority and was open to the public to comment.

The first three year plan from HMICS, it comes as Craig Naylor takes over the role of HM Chief Inspector, succeeding Mrs Gill Imery QPM who retired on April 1.