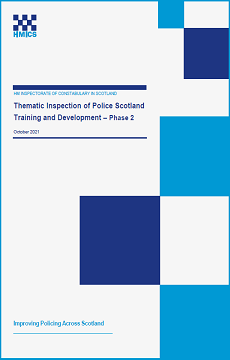 HMICS committed to publishing Phase 2 of its Thematic Inspection on Police Scotland Training and Development in its Scrutiny Plan with the Terms of Reference being published in March 2021.

By the time of the publication of the Phase 1 report in September 2020[1] (Phase 1 Report), it was clear that issues of equality, diversity and inclusion were more important than ever. At that time, HMICS stated its intention to carry out a further inspection focusing specifically on Police Scotland’s recruitment, retention, development and promotion of people from under-represented groups.

This inspection focuses on the internal aspects of equality, diversity and inclusion, given the importance of a police service that is reflective of the communities it serves in order to maintain public trust and confidence. HMICS has looked at all protected characteristics, but has compared and contrasted the progress made in relation to two, as follows:

In June 2021, HMICS published a report on Police Scotland’s response to hate crime, which again pointed out gaps in diversity training, and recommended that Police Scotland review its approach to dealing with hate crime experienced by its own police officers and staff.

This Phase 2 report describes the significant progress Police Scotland has made since the Phase 1 report was published in September 2020. This has been delivered in the challenging context of the coronavirus pandemic. The inspection found evidence of genuine commitment at the most senior levels of Police Scotland to ensure that the service is welcoming and inclusive.

Where the evidence is less clear is the extent to which the strong message from the top is being translated into action that has a positive impact on the day-to-day experience of police officers and staff from under-represented groups working in Police Scotland. The limitations of data available to help the service understand the impact of its activities, identify trends and make improvements, was a recurring theme in this inspection.

As well as highlighting positive progress, our report also raises areas for improvement in relation to the force’s approach to the recruitment, retention, development and promotion of people from under-represented groups.