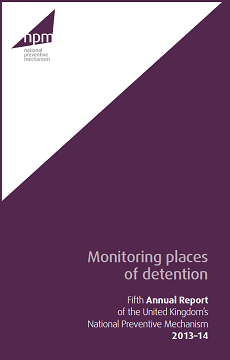 The NPM is made up of 20 independent bodies (including HMICS) with powers to inspect regularly all places of detention. Being part of the NPM brings into their remit the clear purpose of preventing ill-treatment of anyone deprived of their liberty. The NPM was established in 2009 by the UK government to meet its UN treaty obligations regarding the treatment of anyone held in any form of custody and is coordinated by HM Inspectorate of Prisons. Through regular, independent monitoring of places of detention – conducted through thousands of visits every year – the NPM plays a key role in preventing ill-treatment in detention.

2013-14 was a challenging year for many of the bodies monitored by the NPM. Increased demand and reduced resources created pressures that sometimes contributed to the poor treatment of detainees in a number of settings. Over the year, the NPM has brought its collective effort to examining cross-cutting themes that affect most, if not all, forms of detention. These include:

The year ahead will see NPM members work on the issue of solitary confinement and isolation. Across detention settings in the UK, detainees are physically isolated for disciplinary, administrative and other reasons linked to regimes. Some practices in the UK may amount to solitary confinement. However any measures that isolate detainees should only be used for the shortest possible time, when strictly necessary and be the subject of close supervision.

On behalf of the 20 members of the UK NPM, Chief Inspector of Prisons Nick Hardwick said:

“Long experience in the UK has taught that those detained in any setting, out of sight and with little recourse to safeguards, are especially vulnerable and that regular, independent monitoring has a key role to play in preventing ill-treatment or worse.

“Five years after its designation, the NPM is well established and the powers and responsibilities afforded by OPCAT have been integrated into members to strengthen their reach, expertise and independence. However, this is only the first stage. Over the next five years I hope that the NPM’s work will be developed further, its powers strengthened, the cooperation and coordination between members improved, and detainees – wherever they are held – will be better protected from ill-treatment. In this way I believe the UK’s long tradition of work in this area will continue to be an example that others will wish to follow.”